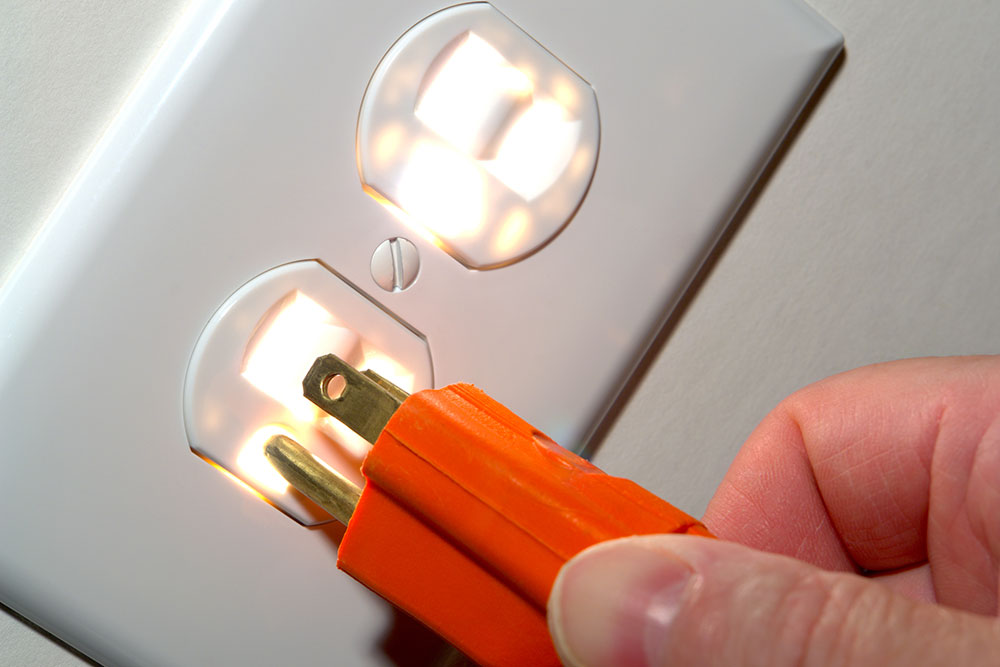 It’s Friday night. You and your family just cleaned up dinner and are downstairs watching TV. Soft lighting sets the movie mood while the ceiling fan blows a cool breeze. The dryer spins a soothing tumbling and fills the room with the sweet smell of fabric softener. The dishwasher swooshes and swirls.

You head to the kitchen to make popcorn— but next thing you know, it’s lights out. All appliances shut down and you’re sitting in the dark.

“Ahh, a tripped breaker,” you grumble and trudge into the garage. You swing open your electrical panel and lo-and-behold— you’re right! The downstairs breaker is tripped into the off position.

You start making note of all the appliances operating off that single breaker: the TV, the lights, the ceiling fan, the dryer, the fridge, the toaster oven, the microwave, the dishwasher. Geez. It’s no wonder it tripped!

It may be a pain to fumble with the electrical panel, but your tripped circuit breaker just prevented thousands of dollars of damage.

Let’s look at what caused the breaker to trip and how exactly your circuit panel works:

Getting to Know Your Breakers & Electrical Panel

Your breakers are all housed inside of a protective box called your electrical panel. Once you open up the metal door, you’ll probably see numbers labeled on each circuit breaker, many even a written description on masking tape beneath reading “Living Room” and the other areas of the home that each breaker powers. Each circuit breaker connects to certain outlets, powering all the appliances and electrical devices in a set outlet grid.

How Many Outlets Can be Placed on One Breaker?

Each breaker can be attached to any number of outlets you choose, but each circuit is only designed to withstand a certain amperage of power.

In our narrative in the intro, the family had their kitchen, living room, and laundry room all on one circuit breaker. While this is certainly possible, it’s clear that the breaker had too much voltage to handle! The breaker became overwhelmed by all those high-voltage appliances (the fridge, dishwasher, dryer, etc.) running at once and exceeding its amperage rating.

How a Circuit Breaker Works

When you’re running more electricity to a breaker than it was rated to handle, the excessive current causes the wires inside your breaker and outlets to become very warm. These hot wires can easily become a fire hazard or transfer that damaging heat to your gadgets and fry them.

This is why circuit breakers were designed with a safety mechanism to avoid sparks flying from overloaded outlets and prevent electrical fires.

When a circuit breaker is forced to contain more voltage and amperage than it was designed to support, an arm inside of the breaker “trips” or moves to turn off the breaker. This immediately shuts off all the power in that zone and keeps you safe from harm.

Curious to see a breaker tripping in action? Check out this video by Warped Perception, which does an excellent job depicting what happens inside of a breaker when it becomes overloaded:

Have you ever noticed that some of your outlets have two buttons on them to reset the outlets and a third hole for your plug? These are called GFCI outlets and they’re designed to automatically trip an outlet when moisture or water is detected nearby— cutting current instantaneously.

When this happens, all you need to do is press the red “Reset” button to reset the outlet. But because it’s not always easy to access GFCI outlets, some folks choose to have a GFCI service panel installed to add GFCI protection to their entire circuit instead of simply relying on GFCI outlets. For instance, your kitchen outlets are probably GFCI outlets, and if your outlet powering your refrigerator trips, it would be a pain to move your heavy fridge to reset it manually. That’s where whole-house GFCI control comes in handy.

Other Reasons a Breaker May Trip

So far, we’ve learned that excessive current and moisture can trigger a breaker to trip, but there are a few other reasons a breaker might shut off, including short circuits, ground faults, or damaged wires. Troubleshoot the cause of your tripped breaker here.

If You Have a Fuse Box

If you live in an older home or apartment, you may have a fuse box instead of a circuit breaker.

A fuse is a thin wire enclosed in a casing that connects into the circuit. Just like a circuit breaker, the fuse protects the wires from overheating and starting an electrical fire. Each fuse is rated for a maximum amperage, and when the circuit heats beyond that point, it burns up, opening the circuit and cutting off power.

Are Your Breakers Tripping Often?

If your circuit breaker is continually tripping, that means your wires are consistently getting too hot or you need a new electrical panel. Fortunately, this might be something you can fix yourself by reconfiguring your electrical panel breakers and outlets.

Our free Electric Toolkit which will show you how to check your outlets and troubleshoot the trip. Download it today.

Explore our Electrical Panel and Breaker Services for assistance upgrading or repairing your circuit situation or call at 239-307-0716.

“They were responsive and friendly during inquiry and scheduling. Rainier was the electrician that came to complete the service. He was also friendly, attentive to details, and completed all the work quickly. We will request Rainier when we call SWFL electric again and we would recommend them for anyone looking for an electrician in SWFL.”

Jack B.
VIA: GOOGLE

“Phillip and Alex did a great job installing a generator feed box and interlock system on my home. They arrived on time and were very professional. They cleaned up after themselves and talked me through the safe operation of using the generator interlock system. I highly recommend using Southwest Florida Electric Inc. for your electrical needs.”

We don’t like getting shocked when receiving an invoice and neither do you, which is why we give you the price you’re paying up front.

You need electrical work you can count on day and night. We use the latest technology to ensure you’re getting high-quality, reliable products.

We give you the peace of mind knowing our work is state certified and your property is protected every step of the way.