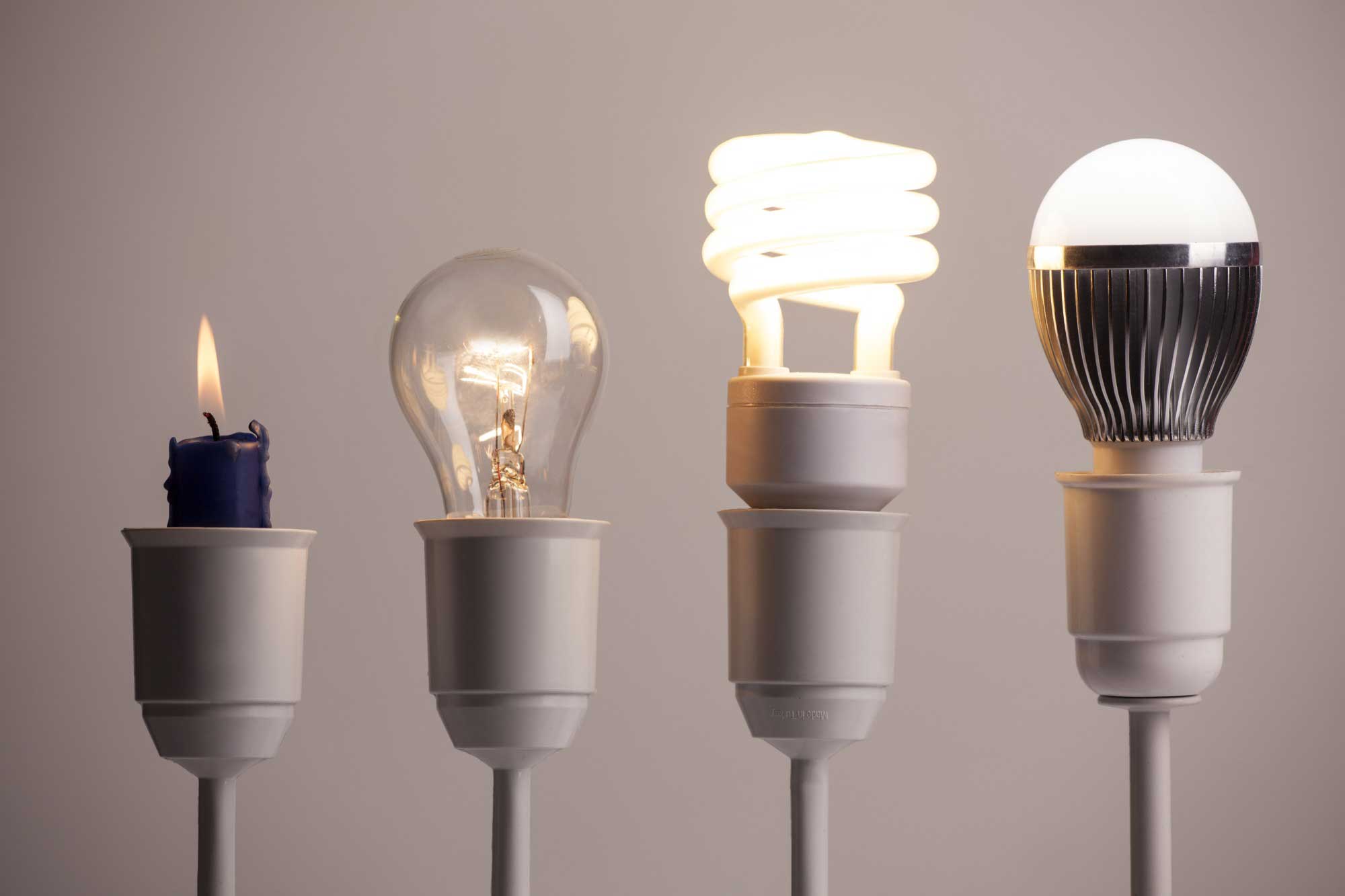 We’re all guilty of moving into a new house or apartment and just using the bulbs already there. Afterall, how big of an impact can switching out your lights really have?

Well, you may be surprised to learn that taking the few minutes to swap out your bulbs could be one of the fastest ways to cut your energy bill costs.

Let’s look at what makes traditional incandescent bulbs inefficient and compare the three most popular types of newer style bulbs to help you reduce your electricity consumption.

The Problem with “Traditional” Bulbs

With 90% of their energy given off by heat, traditional incandescent bulbs use a lot of energy to produce light, wasting electricity (and your money!) compared to more efficient, modern bulbs.

In fact, according to Energy.gov, replacing your home’s five most frequently used light fixtures with ENERGY STAR bulbs could save you $45 each year. Now, in the short-run, that doesn’t seem like a lot, but over the years, it adds up. The additional environmental benefits and added convenience are just icing on the cake.

Your Choices for Improved Energy Efficiency

Although newer forms of lighting cost more initially, these three bulbs offer greater lifetime savings— as each use less energy than traditional incandescents.

Imagine the bulbs you see in older desk lamps. These lights look a lot like traditional incandescents, but there’s a small modification that makes a big difference.

Unlike traditional incandescent lights, halogen bulbs have a small amount of gas inside of them. This gas prevents soot build-up (think of the dark color you’ve seen inside of older bulbs). When the gas gets hot, a chemical reaction causes the halogen to bring any soot back to the center, rejuvenating and slowing down the destruction of the filament. Halogen lamps may also have an inner coating that reflects back heat, improving efficiency by “recycling” the otherwise wasted energy.

As a result, halogen bulbs last longer and are brighter than traditional incandescents. The problem is, they only meet the federal minimum energy efficiency standard— and nowadays, there are more efficient options: like CFLs and LEDs.

A compact fluorescent lamp uses about one-third the energy and lasts about 10 times longer than halogen incandescent, making CFL an instant win over the first option.

In these lamps, electric current is driven through a tube and generates ultraviolet light. This stimulates an interior fluorescent coating and causes an emission of light.

These are traditionally the spiral bulbs and tubes you see on ceiling fans or hard-to-reach areas, as they do not need to be changed often, and are used in many common household fixtures. CFLs are most efficient in areas where lights are on for long periods of time— think outdoor flood or spot lighting— and are often paired with protective containers to withstand outdoor weather.

Let’s not forget these two major perks. CFLs typically pay for themselves in less than nine months and last up to 15,000 hours, or almost two years of continual use, according to Energy.gov.

As one of today’s most energy-efficient bulbs, light-emitting diodes can have a life of 25,000 hours or more. That’s three years of running constantly, up to 25 times longer than incandescents. It’s no wonder they’re used in industrial settings like traffic signals or vehicle brake lights and for TVs.

They’re resistance to breakage and focus light in a single direction. With other bulbs, light is reflected to the desired direction, and sometimes more than half of it never leaves the fixture. Because of this, LEDs emit little heat and waste less energy. For comparison, incandescent bulbs release 90% of their energy as heat while CFLs release about 80%.

They’re also one of the only bulbs that contains no mercury, which, according the Energy Department, means they leave a smaller environmental impact than incandescents and CFLs. In fact, switching to nothing but LED lights over the next two decades could save the U.S. $250 billion in energy costs and help to avoid 1,800 million metric tons of carbon emissions.

There’s Ways to Save— No Matter Which Lights You Choose

Although LEDs are often the clear winner for their energy efficiency and cost, choosing a CFL or halogen bulb is still a major win over a traditional incandescent.

Adding additional controls like timers and dimmer switches can help lower your light consumption, but if reducing costs is a priority, read our 9 Tips to Lower Your Energy Bills article for more advice. Also, consider downloading The Homeowner’s Easy Electrical Toolkit. It’s packed with helpful information for improving your home’s safety and energy usage.

Our experienced team of electricians at Southwest Florida Electric can access your home and make suggestions for choosing the best bulbs. Simply contact us today.

“They were responsive and friendly during inquiry and scheduling. Rainier was the electrician that came to complete the service. He was also friendly, attentive to details, and completed all the work quickly. We will request Rainier when we call SWFL electric again and we would recommend them for anyone looking for an electrician in SWFL.”

Jack B.
VIA: GOOGLE

“Phillip and Alex did a great job installing a generator feed box and interlock system on my home. They arrived on time and were very professional. They cleaned up after themselves and talked me through the safe operation of using the generator interlock system. I highly recommend using Southwest Florida Electric Inc. for your electrical needs.”

We don’t like getting shocked when receiving an invoice and neither do you, which is why we give you the price you’re paying up front.

You need electrical work you can count on day and night. We use the latest technology to ensure you’re getting high-quality, reliable products.

We give you the peace of mind knowing our work is state certified and your property is protected every step of the way.